PROUD OF TWO CENTURIES SPENT WITH YOU

Knjaz Miloš company is among the largest producers of mineral water, soft and energy drinks. Building on its name and more than two centuries of tradition, Knjaz Miloš develops, produces and markets top-quality beverages that give consumers the feeling of vitality, refreshment and energy every day. Successful business operations are what allows Knjaz Miloš company to develop a leading position on local and regional market, creating a better future for the community and an environment in which needs and expectations of consumers, employees and social community are the source of development ideas. By continuing to invest in new technologies and innovations and by maintaining the high quality of its products with continuous design improvement, by employing young professionals, by training and educating its employees, Knjaz Miloš invests in the culture of leadership and prudent business practices. Knjaz Miloš builds the consumer trust by selling quality products and its diverse production program is expanded and changed every day to keep up with trends in domestic and foreign market and create the taste of new generations.

One time Prince Miloš and his servant found themselves at the foot of mount Bukulja. Since autumn was beautiful and brought high yields, he decided to spend few days in nearby villages and see how his people were living. After a while, the path led him to Bukovik, where he tried to ride across a swampy meadow and his horse got stuck in the quaggy soil. The horse tried with all its strength to pull itself out of the mud, but was unable to do so. The more it tried, the more its feet sunk into the mud. Prince felt sorry for the horse stuck in the quagmire and decided to kill it. His servant barely persuaded him to holster his flintlock.

Next morning, the servant got up early to see what happened to the horse during the night and brought a saddlebag full of oat just in case. He found the horse standing in the mud and carelessly drinking the water springing below it. For the next couple of days, while the prince continued to treat and feast, the servant continued bringing food to the horse every morning. On the fifth day the horse pulled itself out of the quagmire and started neighing and kicking, as soon as it saw the servant.

The servant harnessed the horse and rode it to the stables. He fed it for a few more days and observed that the horse refused to drink the water he gave it. He thought of the water from the quagmire in which the horse was stuck and brought it to the horse. The horse could not get enough of it and drank it all the way to the bottom.

Afterwards, the servant came to Prince Miloš with the story about the horse.

A healing mud, it’s a healing mud, said the Prince out loud and ordered a dug well to be built at the place where the horse was stuck. The word quickly spread among people about its healing properties and people with all kinds of sicknesses started visiting it.

Many years from then, a wellness spa Bukovička banja was built there.

Minerals in waters of Bukovička banja

Bukovička mineral water is a groundwater of vadose origin. It is created in faults of mountains Bukulja, Venčac and Vaga, from sinking surface water. While flowing through sedimentary rocks, the water solves lime and magnesium salts, and then springs to the surface under pressure created by new sinking water. Healing properties of water from this region have been known for centuries and influenced the development of Bukovička banja and Aranđelovac, house of Prince Miloš. 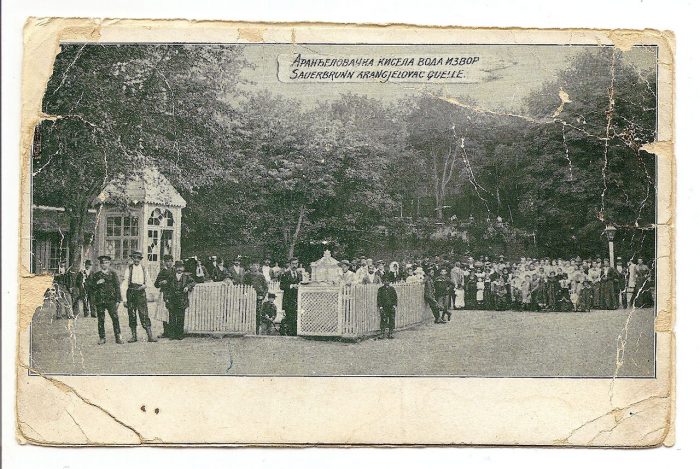 The territory in which Bukovička banja started growing in the 1830s had all natural preconditions required to create one of the most beautiful and most visited spas in Serbia. The first reason to build a spa at this exact location is an abundance of mineral water. Sparkling water from village Bukovik, near the small town of Vrbica, became the most famous among them, both as table and healing water.

According to the words of Dr Emmerich Lindenmeyer, head of the Military Sanitary Service from 1845 to 1859, the first person to visit mineral water springs in Bukovik as early 1811 in the hope of finding the cure for his sickness was no other than Dositej Obradović, educator and the first minister of education of Serbia. Vuk Stefanović Karadžić, linguist and reformer of Serbian language, was also well aware of the healing properties of mineral water from Bukovik.

In 1811 started the tradition of filling jugs, barrels and bottles with the mineral water and it started being delivered to the Serbian court by horse carts and ox carts. 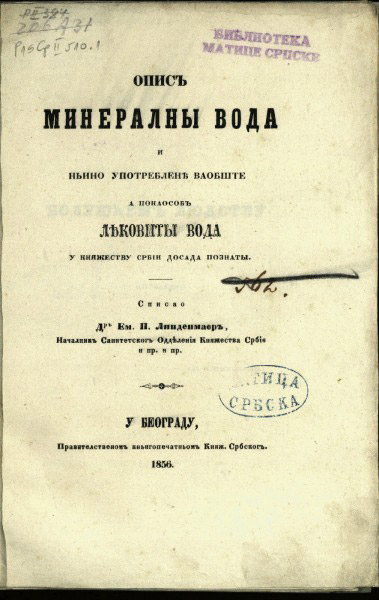 Thanks to the visit of princess consort Ljubica to Kisela voda in 1839, a spring was outfitted with dug well. This was a primitive capture made of carved wood used as a reservoir for collecting water. There was also one overflow pipe for drinking of mineral water.

Starting from 1836 to mid 1850s, thanks to the excellent natural conditions, which included the mineral water, Bukovička banja (Bukovik spa) started to resemble a proper spa. Increasing number of people started to visit, searching for a cure, and notable doctors applied modern balneological methods, popular at the time in renowned European spas. Bukovička banja became a meeting place of distinguished and well-educated guests, both from the country and from abroad.

The first tapping of mineral spring started in 1866, at which time the older spring was named “Prince Miloš”, and the new one “Prince Mihailo”. This was the time when first ideas about industrial exploitation of Bukovik sparkling water spring started to appear. 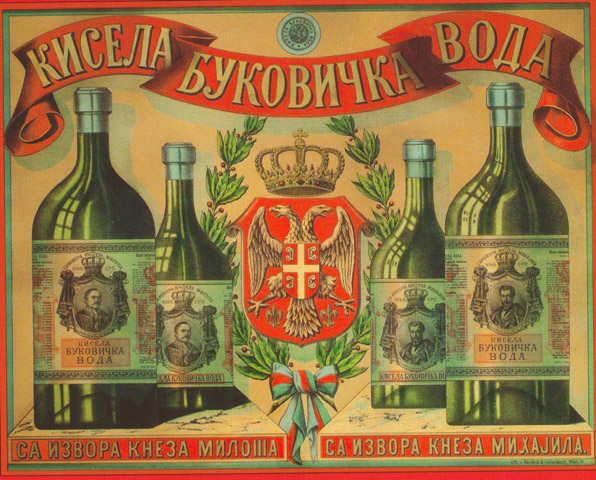 Construction of the railroad Aranđelovac – Mladenovac in 1904 significantly improved distribution of the water. Pavilion of Prince Miloš, known by people as “biveta”, was the first building in Serbia made of reinforced concrete and the location of the first factory for mineral water bottling in Bukovik. It was built in 1907 on the place of the oldest spring. This was the year during which mineral water Knjaz Miloš started being exported abroad, while the very first awards for quality received in Brussels and London fairs proved to be a real incentive for work and further progress. 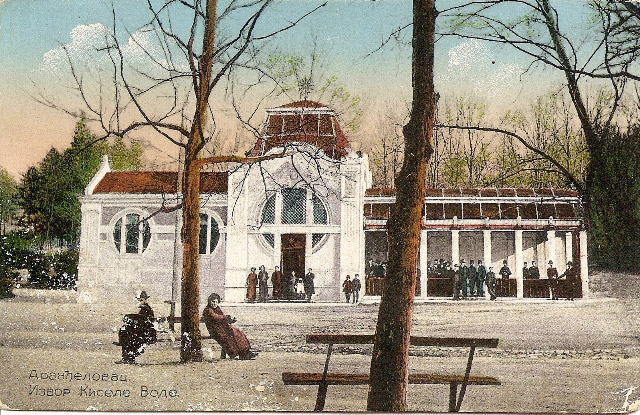 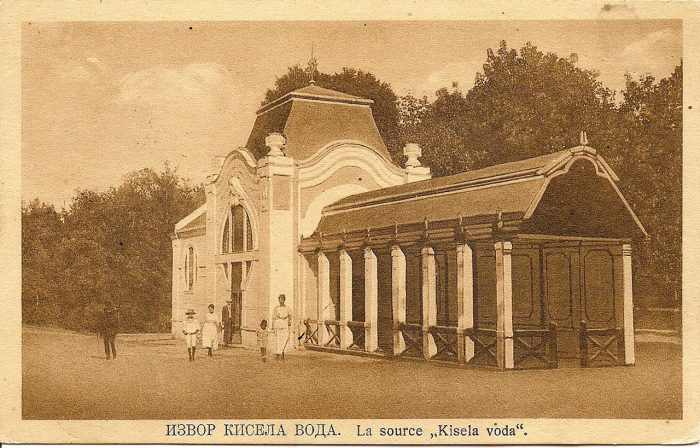 Between two world wars, both spa and mineral water factory were managed by “Štedionica dunavske banovine” (eng. Danube banovina savings bank). Investments of “Štedionica” were used to renovate both Old and New building and to carry out more in-depth analysis of mineral water. Funds were also used to build “Šumadija” Hotel, as well as closed bath with open pool, the only one of this type in Serbia.

Thermal spring was opened in 1935. Approximately 3000 bottles of mineral water per day were filled at the time. Bottles were packed in heavy wooden crates containing 36 bottles each. “Knjaz Miloš” spring was recaptured in 1947. During the 1950s, the spa recorded constant growth of visitors.

Due to high demand, this spring was equipped with installation for adding natural carbon dioxide to the water. This was the gas released from the thermal spring which was at the time equipped with compressor station. So 1956 became the first year during which Serbia produced more than million litres of mineral water. Bukovik sparkling water was the only water in Serbia sold in bottles of 0,5 and 0,3 litres. The year 1964 is an important for history of Knjaz, because this was the year when advanced industrial exploitation equipment was installed. That meant the end of manual bottling. 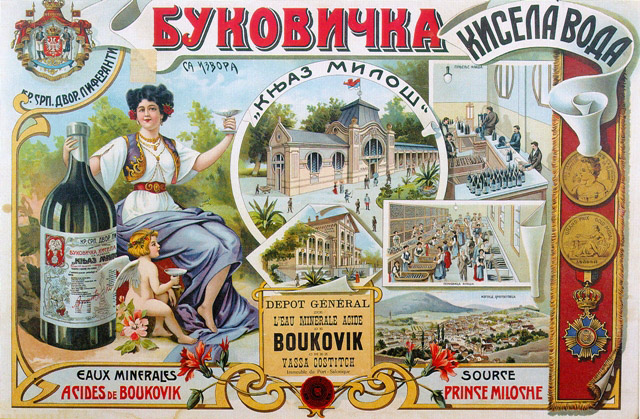 New production hall was built from 1988 to 1990. Distribution centre was opened in Lastva Grbaljska, near Budva, in 1995, and that was also a year during which distribution centre was opened in Novi Sad. With one success after another, Knjaz Miloš wins numerous domestic and foreign awards for product quality. Knjaz Miloš a.d. changed ownership in 2004 and became property of FPP Balkan Limited company, which from January 2005 became a partner with Salford Capital Partners fund.

In 2010 Knjaz Miloš became privately held company and the following year it celebrated two centuries of the company under the motto “Two hundred years in our genes“.

In April 2015, Danube Foods Group company, including companies Knjaz Miloš, Imlek and Bambi, was acquired by London-based fund Mid Europa Partners. Today, Knjaz Miloš is owned by the joint venture company established by Mattoni 1873 and PepsiCo. By following global trends and by implementing modern industrial and management principles, the company manages to achieve great results, and its diverse and quality portfolio can match the portfolios of the largest global manufacturers.

The story of mineral water from Bukovička banja and history of Knjaz Miloš company referred to and was largely based on the monograph Two Centuries of Bukovička Banja, prepared by Zorica Petrović and published by National Musuem in Aranđelovac.

Social responsibility is an integral part of business culture and identity of Knjaz Miloš company. As a reliable and responsible partner, we continually invest in the community in which we operate, aiming to contribute to its development, to improve quality of life of our fellow citizens and to create more beautiful and better environment for the generations to come. Social responsibility of Knjaz Miloš company is mostly focused on local community of Aranđelovac, city of its origin. As a responsible corporate citizen, the company follows the needs of local community, actively participating in the life of cultural institutions, schools and health services.

Central social responsibility project in Aranđelovac was renovation of Pavilion of Prince Miloš, “biveta”, in Bukovički Park, which is a building of historical importance and the first mineral water factory in Serbia.

A large social responsibility project currently carried out by Knjaz Miloš and its brand Aqua Viva is focused on prevention of deformities which are becoming more frequent in children. Stats show that every fifth child in Serbia has bad posture, every fourth is overweight and as much as 70 percent of children lack physical activity. As a brand that promotes active lifestyle, Aqua Viva started a program “Let’s Get Our Children Moving” which introduces everyday 15-minute exercises for students between 1st and 4th grade in all elementary schools in Serbia. Aqua Viva realizes this project with an aim of creating healthy habits and developing an active lifestyle in children. The project is carried out in cooperation with the Ministry of Education, Science and Technological Development and Serbian Association of Physical Education and Sports Teachers. Find out more about the program “Let’s Get Our Children Moving” at
pokrenimonasudecu.aquaviva.rs.

You can find out more about which cookies we are using or switch them off in settings.