Reconstruction of Cultural and Historical Monument in Aranđelovac

Aranđelovac, September 22, 2015 – Today, Knjaz Miloš company signed a memorandum on reconstruction of Knjaz Miloš Pavilion with Aranđelovac Municipality and Special Hospital „Bukovička banja“.
Total value of reconstruction works, which will be completed by July 2016, is 20 million dinars. Reconstruction of the building located at the location of the oldest mineral water spring in Serbia, which is a symbol of both company and city of Aranđelovac, is financed by Knjaz Miloš company, Aranđelovac Municipality, Special Hospital “Bukovička banja” and Government of the Kingdom of Norway.
“Earlier this year Knjaz Miloš changed ownership and became a part of “Moji brendovi” company. New owners and employees of Knjaz invest their resources and knowledge in development of factory, our brands, striving everyday to expand to markets outside Serbia, but we never forget where we came from and a place where our factory is located. This is why investing in local community, in Aranđelovac, will be strategic orientation of Knjaz in the following period. I am proud that in the first year after the change of ownership Knjaz has decided that it is time to reconstruct Knjaz Miloš Pavilion, which certainly deserves it, being a guardian of Aranđelovac history and of our company”, said Miloš Stojisavljević, general manager of Knjaz Miloš company.
President of municipality, Bojan Radović, spoke on behalf of Aranđelovac and said: “I would like to thank everyone who participated in realization of the project, which was jointly financed by Aranđelovac municipality, “Knjaz Miloš” company, Special Hospital “Bukovička banja” and Government of the Kingdom of Norway. We, as a local government, support preservation of and return to proper and respectful attitude toward cultural and historical values, and Knjaz Miloš Pavilion certainly falls in that category.” 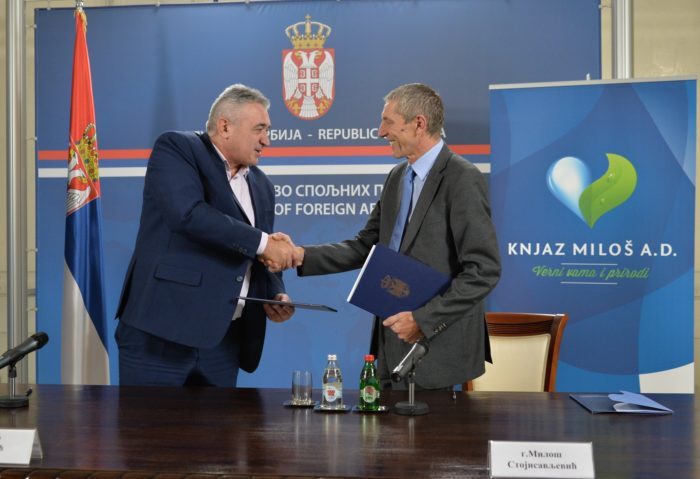 After the great success of drinks with the taste of lemon and raspberry, Knjaz Miloš decided to please many fans and with a new reinforcement with th ...

During the most beautiful period of the year, we trid to our best and make the youngest, but especially important members of our community happy this ...

KNJAZ MILOŠ AND PEPSI TEAM UP IN SERBIA AND MONTENEGRO ...

Knjaz Miloš company became the official producer and distributor of Pepsi brands of non-alcoholic carbonated beverages for the markets of Serbia and ...

You can find out more about which cookies we are using or switch them off in settings.